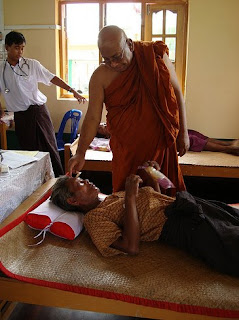 (Image: Sitagu Sayadaw reassures a patient suffering from dehydration and shock, from the flickr album by a user named Cyclone Nargis.)

In the aftermath of cyclone Nargis, a 165 MPH monster that ripped through Burma's Irrawaddy Delta and turned much of the fertile region into a waste land, green-clad soldiers from the Tatmadaw (the Burmese Army) are nowhere to be found. Instead, maroon-robbed Buddhist monks emerge as the heroes leading the rescue and recovery effort.

A flickr photo album from an anonymous user named Cyclone Nargis shows the efforts of Sitagu Sayadaw (the Abbot of Sitagu Monastery) to bring relief to the survivors.

Rangoon University, already suffering from neglect since the student-led uprising in 1988. now resembles a jungle. The congregation hall still stands, but surrounded by abandoned lecture halls and uprooted trees. A Picasa photo stream by MoeMaka shows the devastation.

Another Picasa photo stream (warning: contains disturbing images) by Salai Than shows a closer look at the human toll and the devastation to the land.
Posted by Kennethwongsf at 11:06 AM No comments: