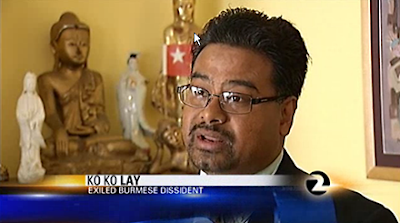 Mabel Tun spent Monday working her phone nonstop. When she wasn't trying to reach her family in Rangoon, she was dialing her Burmese friends in the Bay Area and coordinating a collection of funds to send home for cyclone relief.

"We're all worried because we've heard that a lot of people are dying, but we cannot get through," said Tun, a nurse at the Veterans Affairs Hospital in Palo Alto. "My niece and nephew are in Rangoon, but we cannot contact them. And my parents are in a township with no telephone. I don't know what to do." READ MORE»

San Francisco Chronicle
© 2008 Hearst Communications Inc.
Posted by madnomad at 8:51 AM No comments:

KIDS OF BURMA - NEED OUR HELP!

Posted by Nick Harmony at 2:26 AM No comments:

Hopefully these billboards blew away....

Posted by Nick Harmony at 2:07 AM No comments:

A BOON FOR THE RUIN OF THE GOONS IN RANGOON?

Divine Intervention?
Tuesday, May 6, 2008
Hammered by Cyclone Nargis, many superstitious Burmese cannot help but believe that nature has finally intervened and punished Burma. But it’s is not fair, they say. The cyclone didn’t hit Naypyidaw where all the top brass live.

Traditionally, Buddhist Burmese consider that if the country is ruled by a bad king, it is doomed to face natural disasters—floods, storms and fire. It’s a sign that the tyrant or inept ruler needs to be removed.

And there is reason to believe. The regime unleashed its wrath through brute force on peaceful gatherings of Buddhist monks and their supporters in September, killing dozens of innocent people. Killing monks is an unthinkable crime in a predominantly Buddhist country. Since then, many Burmese people have been warning that bad karma was coming and the generals would be punished.

Thanda, a Rangoon resident in her in late 30s, told The Irrawaddy that she spoke to many locals who believe nature has punished the country because the regime killed Buddhist monks. After having seen the devastation in her city, she said, “It is really sad to see Rangoon turned into a ghost town.”

“I can imagine Madam Than Shwe is now consulting with astrologers,” said a regular visitor to Burma who resides in Thailand. “Snr-Gen Than Shwe and his family are deeply superstitious and they always consult with astrologers and soothsayers before making a decision.”

In 2005, many ordinary Burmese believed Than Shwe relocated the capital from Rangoon to Naypyidaw in central Burma due to advice from his astrologer. Millions of dollars were spent to build the new capital from scratch. Rumor has it that Than Shwe's trustworthy astrologer reportedly told him that the former capital Rangoon would face a natural disaster and social unrest and he was strongly advised to move to a new location.

How ironic then that the catastrophe hit Rangoon and the delta and not the new capital and its high-ranking local elite. Yet again, the innocent people of the country were punished instead of the perfidious oligarchy.

Thanda, who arrived in Thailand on Monday as soon as flights resumed between Bangkok and Rangoon, said, "Sure, Burmese people are angry at the military leaders because the assistance is too slow. However,” she added, “they are also angry at Cyclone Nargis because it did not hit Naypyidaw."

Copyright © 2008 Irrawaddy Publishing Group | www.irrawaddy.org
Posted by Nick Harmony at 2:00 AM No comments: